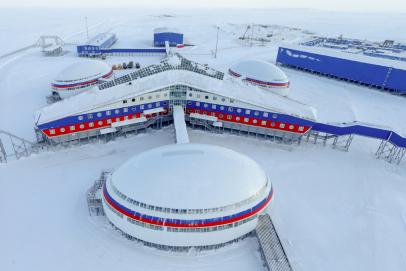 The Nagurskoye base, one of three in this trefoil design in the Arctic, is on the Franz Josef Zemlya archipelago and is Russia’s northernmost military base (photo credit: Wikipedia)

It is now seemingly routine for pundits and security professionals to warn of an impending militarized scramble for dominance over the lands, seas, and resources of the Arctic, with Russia enjoying a formidable advantage – all evidenced by the undeniable expansion of military facilities throughout the region. But it’s not clear that the official West is buying it. The Americans have ratcheted up the rhetoric, but little else has changed. The 2019 NATO summit ignored the Arctic, and individual states like Canada and Norway are sticking with a more nuanced and restrained posture on Arctic security.

While the Kremlin no doubt welcomes any characterizations of Russia as a fearsome presence on the world stage, in the Arctic it insists that its increasingly robust armed forces and exercises are a practical and strictly defensive necessity. With a substantial civilian population and a critically important economic stake in the region, and a national identity that is heavily invested in the north, Russia cannot ignore the reality of an increasingly accessible Arctic – accessible to its own population and industry, to its northern neighbours, and also to friends and potential rivals from China and Europe and beyond.

For essentially the same reasons, the other four Arctic Ocean states (United States, Canada, Greenland/Denmark, Norway), all in NATO, are similarly led to assign a higher priority to northern defence, also recognizing that to be a practical necessity.

Part of the practical reality of the Arctic region is that it is one place where Russia truly is unrivaled as a regional power – and that is unlikely to change in the foreseeable future. The Russian armed forces have decades of Cold War operational experience in the Arctic, and the north is not for Russians the remote north, but is fully integrated into national life, including national security life. Globally, Russia is a much-diminished power (its current military spending is at the level of Germany and roughly a twentieth of NATO states collectively ), but in the Arctic that imbalance is essentially reversed, but it is not by definition destabilizing.

Russian re-militarization in the Arctic now involves a string of some 30-plus military bases, many re-emerging from post-Cold War dormancy, that stretches from Anadyr-Ugolny and Provideniya across the Bering Sea from Alaska, around Russia’s Bering Strait shoreline, along its Arctic coastline, extending into the Arctic Ocean through new and upgraded military installations on five major islands and archipelagos, and culminates on the Kola Peninsula. Those military sites run the gamut of isolated airstrips, infantry and artillery stations, radar and air defence installations, forward operating locations for fighter and bomber aircraft, ports and naval infrastructure, and finally the Kola naval bases which host more  concentrated nuclear firepower than any other single location on the planet.

All around wariness is an understandable and prudent response, but much of the analysis, including offerings in the lead up to and since the December 2019 NATO summit, ignores the massive global Russia/NATO conventional military imbalance in favor of the West, while insisting that forces in the region itself must be more balanced, typically advocating for a much more overt NATO operational presence in the Arctic.  It’s a posture that really belongs to the same strain of imprudence that has long privileged NATO’s eastward expansion over the careful pursuit of Eurasian stability. It is notable, however, that in London, NATO leaders demurred. Their final declaration was silent on the Arctic, as had been the 2018 summit communique.

Notwithstanding Russia’s expanding military presence, the Arctic remains well down the list of official worries for an alliance that faces a rather high wariness quotient these days – on its Baltic and southern flanks, the North Atlantic Greenland-Iceland-United Kingdom (GIUK) gap, and, notably, a political flank that features growing internal challenges from both sides of the Atlantic. There are good reasons for the official silence and for questioning the more alarmist warnings about Russia’s Arctic ambitions, and it’s not just a matter of NATO having more immediate concerns elsewhere.

Even their critics recognize the legitimacy of the Russian forces’ basic military missions in the Arctic: sovereignty protection, public safety (e.g. search and rescue), the defence of its northern resource assets, and enforcement support for a more robust regulatory infrastructure for the emerging Northern Sea Route that runs entirely through Russia’s exclusive economic zone or territorial waters. Furthermore, a primary Kremlin interest in the Arctic is to avoid military confrontation in favour of promoting a stable security environment conducive to exploiting northern resources and to enticing much needed foreign investment and technology. In other words, military adventurism against neighbours does not fit Russia’s basic Arctic game plan.

The degree to which Russia’s Arctic military assets are seen as a threat to stability depends heavily on the context. Viewed in the global context (with places like Ukraine, Georgia, and Syria looming large), Russian intentions anywhere are automatically suspect in the West. Viewed in the context of the Arctic itself, suspicions should be, and actually are, mitigated by the reality of an ongoing tradition of Arctic cooperation, and wariness should also be eased by a recognition of the centrality of good governance in resisting Russian meddling and destabilization efforts.

As the Ilulissat Declaration  affirms, Arctic cooperation and a political commitment to a rules-based order are real. Canada’s “Arctic and Northern Policy Framework” acknowledges that “the circumpolar Arctic can and should continue to benefit from a deeply ingrained culture of international cooperation” (while also warning of “complacency”),  and key Arctic states recognize that continuation of that cooperation accords with Russian interests.

Canada’s Arctic foreign policy simply declares that “Canada does not anticipate any military challenges in the Arctic and believes that the region is well managed through existing institutions, particularly the Arctic Council.”  More recently, a Department of National Defence spokesperson is reported as reaffirming the current absence of a military threat, albeit while also emphasizing “growing international competition in the region.”  Even Norway, sharing a land border with Russia and facing the Russian Arctic brigade stationed a mere 30 kms from that border, continues to insist that it does “not consider Russia a military threat”  – though it doesn’t hesitate to characterize some Russian actions and current posture as worrisome.

The central role of good governance is a reminder of just how different the Arctic context is from that of other locations where Russia has intervened or interfered in independent sovereign states. All the non-Russian states of the Arctic are obviously led by highly stable and competent governments – free, in other words, from the kinds of internal weaknesses that Russia was and is able to exploit in places like Ukraine, Georgia, Moldova, and even Turkey. Russian political and military adventurism threatens in contexts of local instability and dysfunction, but retreats in locations of solid, confident governance and strong national consensus. And, of course, that points to a primary source of protection for territorial integrity and national security in the states of the Arctic – namely, good governance, domestically and regionally, that avoids the kind of disunity and dysfunction that create opportunities for foreign manipulation for nefarious ends.

There is, at the same time, no denying that legitimate national military roles do come with capabilities that could be turned to more threatening purposes. Fighter and bomber aircraft deployed to Russian Arctic locations for air and coastal defence operations certainly also convey threats to neighbours. And Russia’s newest icebreaker is explicitly equipped for operations beyond ice breaking – it comes with combat capabilities that include electronic warfare systems, artillery, and the Kalibr cruise missile with a range of up to 2500 kms for anti-marine and land attack missions.

It is also true that the military roles of NATO states carry the same dual capabilities. The US and NATO can install ballistic missile defence batteries in eastern Europe in the interests of defence, but from the Russian perspective, it pays to worry that those launchers for interceptor missiles could be re-purposed with missiles aimed at Russian targets. Indeed, Russia views NATO’s northern engagements with the same suspicion that it views NATO’s eastward expansion or NATO’s deployments and accelerated patrols in Eastern Europe and the Baltics. The Russians are unlikely to forget that their four Arctic Ocean neighbors are all members of NATO and lay claim to the all-for-one principle of Article Five.

The key challenge for NATO states in the Arctic is thus to manage that foreboding NATO presence, to Russia, in ways that avoid adding to the escalatory pressures already present. Any constructive Arctic security policy needs to encourage individual Arctic states to focus their military developments on defensive territorial and sovereignty protection missions, on contributions to public safety through enhanced emergency response and search and rescue capabilities, and on support for region-wide cooperation toward those same ends.  Continue reading...

END_OF_DOCUMENT_TOKEN_TO_BE_REPLACED

Dr. Hans Blix, Director-General Emeritus of the IAEA and former Swedish diplomat and Minister of Foreign Affairs, served as Chairman of The Weapons of Mass Destruction Commission, which released its collective findings in the 2006 report: “Weapons of Terror: Freeing the World of Nuclear, Biological and Chemical Arms.”
Learn More
END_OF_DOCUMENT_TOKEN_TO_BE_REPLACED