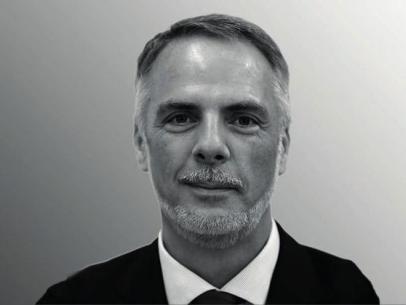 This Award is presented to Ambassador Alexander Kmentt for his role as one of the architects and the engineer of both the Humanitarian Impact of Nuclear Weapons which “dramatically reshaped diplomatic discussions on nuclear disarmament” and the subsequent Treaty on the Prohibition of Nuclear Weapons.  He has demonstrated that he is a true Shaper of a safer world, that he is committed to save humanity from one of the most critical dangers we face.

Dr. Jennifer Allen Simons: "For our Award, we chose the First Nations symbol of The Shaper – a work of art by renowned sculptor Susan Point of the Musqueam Coast Salish Nation, which hosts Vancouver on its lands.

This work, Susan Point says, conveys the notion that all life is inter-related and that the human being – ‘The Shaper” of this world – must always be guided by this fact if he or she is to be a good caretaker of life and the planet.

She says that humans “mould and make…. The Thunderbird is their protector, the most powerful of all spirits in our Salish legacy.  Many legends," she says, “tell of how the Thunderbird has saved ‘the people’ from natural disaster.”

Our definition of a Distinguished Global Leader is a person who shapes and creates the environment; a person whose leadership skills involve foresight and imagination; a leader who creates the blueprint - the guidelines; who develops and advances the path to a safer, more just, humane world.

Alexander Kmentt most truly deserves this Award for his invaluable contribution to a nuclear weapon free future.  His outstanding leadership in bringing to fruition - from its embryonic stage - the Treaty on the Prohibition of Nuclear Weapons - which is universally acknowledged at the United Nations and in the global peace, disarmament and arms control community.

As one of the architects - and I must add the engineer - of both the Humanitarian Initiative which “dramatically reshaped diplomatic discussions on nuclear disarmament” and the subsequent Treaty prohibiting Nuclear Weapons – he has demonstrated that he is a true Shaper of a safer world, that he is committed to save humanity from one of the most critical dangers we face.

Alexander Kmentt is, in the words of a colleague, a brilliant diplomat.   And in my view - I come from a family of diplomats– he is exceptional in his profession – rare in the diplomatic realm – because his global humanitarian approach to security– transcends the conventional national military concept as the protector of states. He understands that national security depends on global security.

He told me, he has the support of the government of Austria, a military neutral country, committed to multilateralism with a focus on non-proliferation of weapons of mass destruction and supportive of humanitarian disarmament initiatives.   Nevertheless, I imagine his enlightened active approach has gone beyond his government’s expectations, enhances Austrian foreign policy and brings enormous credit to his country.

He holds a degree in Law and a Masters Degree in International Relations.  He is a scholar, a fine writer and author of many articles and a book, an exceptional diplomat and – though he does not define himself as such - an activist.  In fact, he says he is not.  Yet, his actions from his youth when he took part in demonstrations against the stationing of nuclear weapons in Europe in the 1980s and against French nuclear tests in the 1990s; and his actions as a career diplomat engaged in reshaping the disarmament discourse, belies this. I imagine he holds the radical view that activists chain themselves to barricades.

His introduction to humanitarian disarmament began when he was Deputy Permanent Representative of Austria to the Conference on Disarmament in Geneva, and engaged in negotiations for a landmine treaty in which Austria played a huge part, providing the first, second and third drafts of the treaty – known as the Ottawa Convention.

Since then he has worked extensively on disarmament and non-proliferation issues, notably as Ambassador and Director of the Department for Disarmament, Arms Control and Non-Proliferation at the Austrian Ministry for Foreign Affairs.

He was responsible for the organisation of, and chaired, the December 2014 Vienna Conference on the Humanitarian Impact of Nuclear Weapons - the third such conference on the Humanitarian Impact of Nuclear Weapons.   He embraced the intergovernmental process and is credited with assembling the most inclusive and extensive gathering, bringing together not only non-nuclear weapons states and civil society, but also five of the nine nuclear weapons states.    He is the author of the Austrian Pledge – later re-named the Humanitarian Pledge – which, at the United Nations gained formal support of 135 states and was instrumental, and the genesis of, the Treaty on the Prohibition of Nuclear Weapons.

Ambassador Kmentt is currently serving as President-designate of the 1st Meeting of States Parties of the Treaty on the Prohibition of Nuclear Weapons (TPNW) which entered into force on January 22nd of this year.

Our deep gratitude to you for your ground-breaking effort to achieve this treaty, and for your forward-looking approach to a better world.  You are in a unique position to effectively further influence the disarmament dialogue in the global community, and to continue your quest to universalize this Treaty.   And we wish you every success.  I invite you now to come forward and to honour us by accepting this Award."

Ambassador Alexander Kmentt is Director of the Disarmament, Arms Control and Non-Proliferation Department of the Austrian Foreign Ministry and President-designate of the First Meeting of States Parties to the TPNW in early 2022.  As a recipient of The Simons Foundation Award for Distinguished Global Leadership in the Service of Peace and Disarmament, he is also one of The Simons Foundation's Peace Shapers.

END_OF_DOCUMENT_TOKEN_TO_BE_REPLACED

Dr. Hans Blix, Director-General Emeritus of the IAEA and former Swedish diplomat and Minister of Foreign Affairs, served as Chairman of The Weapons of Mass Destruction Commission, which released its collective findings in the 2006 report: “Weapons of Terror: Freeing the World of Nuclear, Biological and Chemical Arms.”
Learn More
END_OF_DOCUMENT_TOKEN_TO_BE_REPLACED